A group of citizens saw the need that a segment of the population had limited or no transportation options. This transportation-challenged group consisted of individuals with low income, disabilities, elderly and those without a driver’s license. A grassroots effort led to a transit initiative being placed on the ballot in Logan, Utah. The voters supported the creation and funding, through taxes, of a transit district in 1990. Transit services began zero-fare for citizens and visitors of Logan on April 27, 1992. Services were funded by a local sales tax and through Federal Transit Administration Urbanized Area Formula Program grants.

The Logan Transit District started out with seven 26-foot buses and 3 routes. Service was provided 6:15 a.m. to 6:45 p.m. Monday through Friday, and limited services on Saturday. There was stronger than expected response to the service from the opening day.

In July of 1996 weekday bus service was extended until 8:45 p.m. Monday through Friday, and Saturday service was provided every 30 minutes from 9:15 a.m. to 6:45 p.m. Two more routes were also added, including more frequent peak time service on the busiest routes.

The Logan Transit District was proud to announce in June of 1997 that it surpassed one million passenger trips in a single year. A celebration was held and the one millionth rider was awarded prizes. In the years of 1996-1997 eleven new 32-foot ElDorado Transmark buses were purchased.

On April 19, 1998, the bus garage facility opened its doors. It houses the Administration, Operations and Maintenance functions all at one facility. It also provides storage of transit vehicles in a fenced and secured site.

On November 7, 2000, Cache Valley voters elected to establish the Cache Valley Transit District (CVTD). As part of this public referendum, voters ratified the creation of a special service district that includes the cities of Richmond, Smithfield, Hyde Park, North Logan, River Heights, Providence, Millville, Nibley, and Hyrum. In addition, sales tax was established to fund the CVTD. Lewiston City was also added to the district at a later date.

The bus fleet expanded to 35, made up of 26 fixed-route and 9 paratransit coaches. Annual revenue service miles operated are just over 900,000. In May, 2012, CVTD expanded paratransit service called “Call-A-Ride,” significantly enhancing service opportunities for the special needs community.

From 2000 to 2007, the two Districts, LTD and CVTD, operated independently, serving Logan City and the Cache Valley respectively. On February 23, 2007, LTD was annexed into the CVTD. The CVTD is governed by a 19 member board of trustees appointed by the county council and city councils of cities within the District. Board of Trustees members are selected without regard to partisan political affiliation from among citizens in the community. 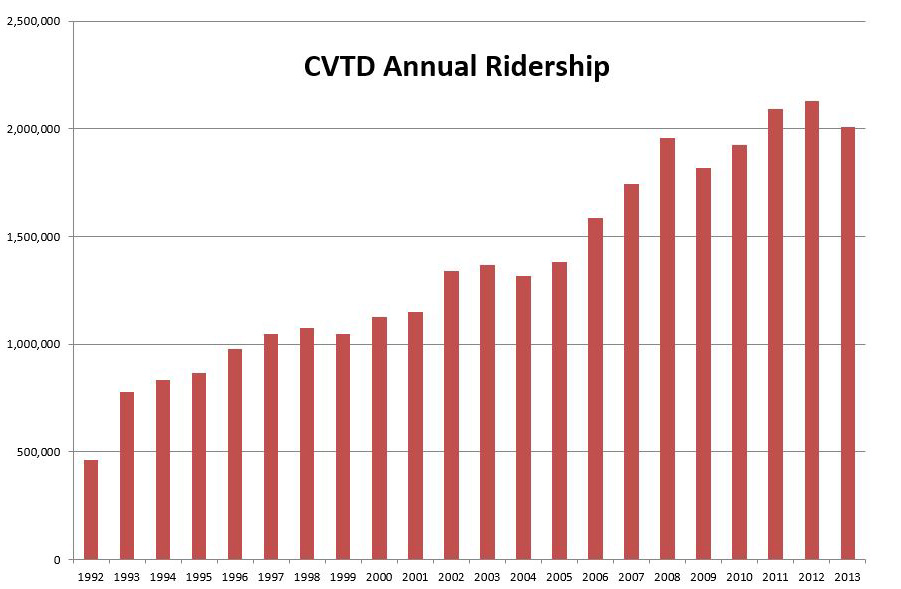 In 2012, CVTD was awarded the “Thanks for the Lift” award by the Federal Transit Administration. Terry Rosapep, FTA Region 8 Regional Administrator, stated, “The FTA Region 8 Award for Ridership considered three factors: the increase in ridership over the last 10 years, the efficiency of the transit services considering operating costs, and the magnitude of transit usage considering the overall population of the community. That Cache Valley Transit was tops overall in the six states that encompass FTA Region 8, reflects the professionalism and dedication of its staff, and the strong support for transit within the Cache Valley community by residents, the University, and businesses.” In 2015, CVTD was awarded the Community Transportation Association of America’s 2015 Urban Transit System Of the Year award.

Board Meetings are held on the 4th Wednesday of every month at 5:45 pm at the Bridgerland Applied Technology College, 1301 N 600 W Room 840, Logan. Board meetings are open to the public.